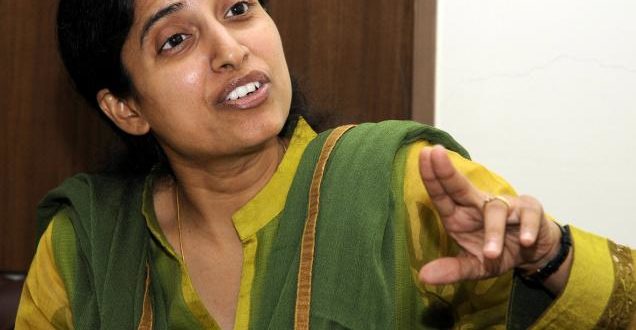 Bharathi Reddy – Chair person of Sakshi Group, wife of Kadapa MP and YSR Congress (YSRC) president Y.S. Jagan Mohan Reddy, criticised the CBI on Thursday for seeking more time to complete investigation into the case relating to the disproportionate assets of her husband.

Talking to reporters, Ms. Bharathi Reddy faulted the probe agency for seeking time 21 months after investigations began. Dubbing the CBI as a “tool in the hands of its master”, she said it was evident from the very beginning that the case was politically motivated.

She said the people had stood by Mr. Jagan as they felt he was “victimised” and believe that he would deliver like his father and late Chief Minister Y.S. Rajasekhara Reddy.

No tiff with Sharmila

On reported differences between Mr. Jagan and his sister Sharmila, she said it was “morally wrong to talk like that”.

“It is a huge sacrifice to walk like that for somebody. She is mad about her brother,” she added. She pointed out that Ms. Sharmila had her own family to take care of and that she never came forth when YSR was alive.

Read :  A sea of humanity on the banks of Krishna
Share