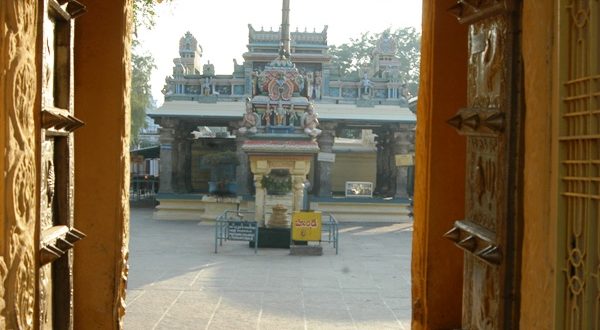 Devuni Kadapa (Telugu: దేవుని కడప) is a place in Kadapa City, famous for the temple of Sri Laxmi Venkateshwara. It is historically been known as the gateway to the temple of Venkateshwara, the presiding deity of Tirumala. Also called as Devuni Gadapam , it derives its name from Gadapa , a Telugu word, which means Threshold or gateway or doorstep . Such is the importance of this temple, from the olden days it was believed that every pilgrim who visits the temple of Sri Venkateshwara at Tirumala, should visit this temple on their way to Tirumala only then it is believed that their visit to Tirumala is complete.

Sri Laxmi Venkateshwara Temple stands as an outstanding example of Vijayanagar architecture. The very sight of the temple, with great sculptures and carvings adorning it, takes you back to the Vijayanagar Era. There is a sculpture of dancing Vigneswara (Lord Ganesha), a master piece of those times, in the Mukha Mandapam (main hall). Sri Laxmi Venkateshwara temple is popularly known as Hanumath Kshetram as there is an idol of Anjaneya (Lord Hanuman) behind that of Lord Venkateshwara in the sanctum sanctorum. It is believed that Sage Kripacharya had installed the idol of the presiding deity.

It is said that Tallapaka Annamacharya visited this place and all the Sankaracharya s of the Advaita Mutt, heads of Ahobilam Mutt and Mahakavi Kshetrayya also visited this place. Recently, this temple has been undertaken by the Tirumala Tirupati Devasthanam.

Devuni Kadapa is also known as Tirumala TholiGadapa The place Kadapa is named after the word Gadapa which is originated from the word “Devuni Gadapa” means “Entrance for The Lord Venkateswara Swamy”. The Idol of the Lord Venkateswara has been established by Kripacharya, hence the ancient name of devuni kadapa is also mentioned in puranas as “Kripavathi Kshetram”. Pilgrims who are about to visit Lord Venkateswara `this is because first they have to pray Annamacharya and potuluri veerabramhendra swamy. This temple is very famous in Rayalaseema region, people from various places visit this temple, and this temple is generally crowded on Saturdays.

Another feature of this temple is its uniqueness of lord venkateswara features an idol of lord anjaneya in its reverse. Devuni kadapa is constructed in vijayanagara style of architecture; devuni kadapa temple has impressive sculpture and Architecture of dancing lord Ganapathi at mukha mandapam.

Devuni kadapa temple is just 7km away from railway station, 3 km away from City Bus Station. This temple has kasi balli which people believe that if there is any dosham (ill effects) because of balli (lizard) those doshams shall be cleansed by touching the kasi balli on the roof of temple.

The place where devuni kadapa is situated now is also known as patha kadapa (old kadapa). Utsavas and every puja would be done as same in tirumala. Pilgrims from various countries and states in India who wish to visit Venkateswara swamy temple in Tirupathi will also intend to visit devuni kadapa temple, generally, devuni kadapa temple is very crowded at the time of Utsavas. Devuni Kadapa is an archeological treasure.

Read :  Bhairva Kona in the heart of Nallamala

How To Reach Devuni Kadapa :

By Road/Bus : Kadapa is connected with the major and minor cities of Andhra Pradesh by both state transport corporation and private buses. The cities like Hyderabad, Chennai, Bangalore, Tirupati etc are well connected with Kadapa.

By Air : Kadapa has its own airport, situated at a distance of 8 km from the city center. Besides this, airdromes at Hyderabad, Chennai, Bangalore and Tirupati are quite near to the city. The further distance to be traveled for getting to the city can be covered by private taxis or state buses.

By Train/Rail : Kadapa Railway Station is located on the Chennai-Tirupati-Pune-Mumbai line. From Hyderabad, it lies about 405 km away and regular trains ply on this route. Though the city is not directly connected with the other parts of India by train, the stations at major cities within the state connect it indirectly.