A trial run on the Kadapa-Pendlamarri railway line would be conducted by the end of February. The track is part of the broad gauge railway line connecting Kadapa and Bangalore.

The government’s 20-point programme implementation committee chairman N Tulasi Reddy on Thursday inspected the project at Pendlamarri. Later, speaking to reporters he said the works on the railway line between Kadapa-Bangalore is being taken up in four phases– Kadapa-Pendlamarri, Pendlamarri-Rayachoti, Rayachoti-Vayalapadu and Mulbhagal-Kolur. In the third phase, there are three sub-phases which connect Vayalapadu to Mulbhagal. The total length of the line is 257 km.

After inspecting the works, Tulasi Reddy said 80 per cent works on the first phase, which covers 21.8 kilometres, have been completed. The works would cost `124.99 crore and the state and Centre will bear the cost equally. Tulasi Reddy said the total lands that have to be acquired between Kadapa to Pendlamarri is 311.84 acres and nearly 285 acres of land had already been acquired.

“Works on construction of 54 minor bridges of the 56 bridges under the first phase have ben completed. The remaining two are under construction. Works on three major bridges have completed and three others are in progress,’’ he said adding that the trial run of the railway engine will be conducted in Feb 2014.

The 20 point implementation committee chairman said he will take up the release of funds for completion of the works with the Centre as well as the chief minister N Kiran Kumar Reddy.

‘This is the right time’ 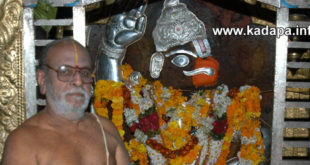