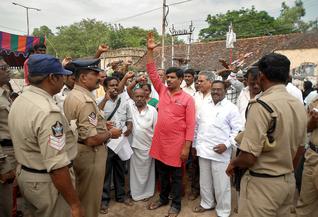 Folk artistes carrying their musical instruments staged a dharna in front of Kadapa Collectorate on Monday and raised slogans demanding identity cards, grant of pensions to aged artistes and allotment of house sites.

A.P. State Folk Artistes Association president P. Yadagiri demanded that District Collector K. Sasidhar instruct officials concerned to provide opportunities to artistes all over Kadapa district, rather than conduct programmes for a handful of them. The State has 1.60 lakh folk artistes, who were in about 10,000 troupes, he said.

However, only four cultural artistes got a chance to perform in the recent World Telugu Conference, Mr. Yadagiri said. Folk artistes in other districts are getting several opportunities, but those in Kadapa district are languishing he alleged.

The State president demanded that Gandikota festival be conducted and ample opportunities be provided to folk artistes in the district.

Mr. Yadagiri, State executive member A. Jagan and other members submitted a representation to the Collector and apprised him of their problems.

He assured Mr. Yadagiri that he would convene a meeting soon to discuss their demand for allotment of house sites.