Region of the state where the district is located:

Kadapa district is the extreme south eastern district of Andhra Pradesh and lies in the heart of the track of land that forms the southern deccan plateau, popularly referred to as the Rayalaseema. It lies between 13o 43’ and 15o 14’ of the northern latitude and 77o 55’ and 79o 29’ of the eastern longitude, the district spreads north wards beneath the western slopes of the eastern ghats as a rough parallelogram dented deeply in its southern, western and northern boundaries. It is bounded on the north by Kurnool, on the east by Nellore, on the south by Chittoor and on the west by Anantapur districts.

Number of Revenue Divisions and Mandals:

Consequent on the introduction of mandal system of Administration during the year 1985, there was change in the territorial jurisdiction of the district. Hitherto there were 12 taluks with 3 revenue 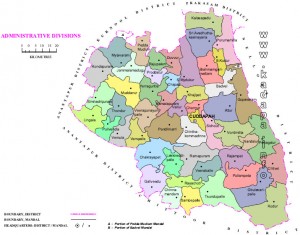 divisions. Subsequently 12 erstwhile taluks were divided into 50 mandals taking into consideration each firka roughly as a unit of administrative mandals which are co-terminus with the revenue mandals in all cases except that the statutory towns are not included in the jurisdiction of the mandal parishads. Of course there were little changes here and there, but firka is the base for mandal setup in the district. In the interest of better administration and quick development of the areas concerned the district had undergone some changes during the 2001 census.

There are 972 villages at 2001 census as against 968 villages at 1991 census. The difference is due to (1) One village by name of Parnapalle is included in Lingala mandal from Tadimarri mandal of Anantapur district (2) Five panchayat towns are declassified and

shown as revenue villages (3) One village i.e Kodur west newly sprung up after 1991 census in Kodur mandal. Nine villages are fully submerged in Somasila project and 18 revenue villages have been deleted from the list of villages as they are now part of Panchayat towns/Municipalities. The details of the villages with 1991 census L.C.Numbers (within brackets) included fully in the urban areas are given in the annexure to the alphabetical list of villages. Thus the total number of villages has come up from 968 to 972. In 1991 census there were 15 towns in Kadapa district. Out of these 15 towns, 5 Panchayat towns viz. Badvel, Kamalapuram, Nagireddipalle, Pulivendla and Rajampet are declassified and treated as revenue villages during 2001 census due to strict application of criteria for treating a place as town. Further 2 villages of 1991 census viz. Rameswaram and Yerraguntla have been treated as census towns for the first time at 2001 census taking the total towns in the district to 12. At present there are 2 statutory towns, 10 census towns and 51 mandals. These mandals have been organised into 3 Revenue Divisions in the district.

Read :  Kadapa District Collectors - Before Independence (Prior to 1947)
Share