Kadapa: YSR district now acquired a unique record of having three IPS officers, including the Superintendent of Police. Congress government posted young IPS officer Vikram Jeet Duggal in Pulivendula on 10th January, in what is being seen as a bid to keep a tab on Kadapa former MP Y S Jaganmohan Reddy ahead of the impending bypolls.

Kartikeya, an IPS officer of the 2006 batch, has been serving as the ASP of Jammalamadugu police sub-division in the district.

Duggal of 2007 batch has been transferred from Maoist-affected Rampachodavaram in East Godavari district and posted as Assistant Superintendent of Police of Pulivendula police sub-division. 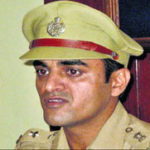 Government sources are saying – “Pulivendula is a faction-ridden, sensitive area and a young direct recruit officer can be very effective in maintaining law and order. Hence Duggal has been posted there” .

According to government Jammalamadugu is also a faction-ridden constituency represented by Adinarayana Reddy, a close follower of Jagan. Pulivendula and Jammalamadugu form part of the Kadapa Lok Sabha constituency and the posting of two young IPS officers is seen as a clear attempt by the ruling party to rein in Jagan.

It may not be a surprise if 3 more IPS officers are posted to the district within Kadapa Loksabha constituency saying faction as a reason, to control supporting MLAs of YS Jagan in view of bypolls.