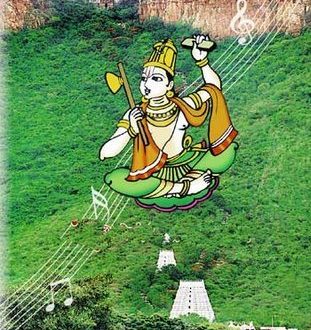 Sri Tallapaka Annamacharya (1408-1503) the mystic saint composer of the 15th century is the earliest known musician of South India to compose songs called “sankIrtanas” in praise of Lord Venkateswara, the deity of Seven Hills in Tirumala, India where unbroken worship is being offered for over 12 centuries.

Annamcharya is believed to be the incarnation of Lord Venkateswara’s. nandaka (Sword). A rhyming couplet of poems called “Dwipada” written by Tallapaka Chinnanna, grandson of Annamacharya, enabled us to learn about the Saint Annamacharya, his life and works.

Annamacharya was born on Vaisakhapoornima in the year Sarwadhari (May 9, 1408) in Tallapaka, then a remote village in Kadapa district of Andhra Pradesh, and lived immaculately for 95 years until Phalguna Bahula Dwadasi (12th day after full moon) in the year Dhundhubhi (February 23, 1503).

It is believed that in the 10th century a big famine broke out in Varanasi and scores of scholars migrated to southern part of India for earning their livelihoods. Some of them concentrated in a town called “Nandavaram” in Andhra Pradesh which was ruled by the then king Nanda. These immigrants were called “Nandavarikas” and Annamacharyas forefathers were the so called Nandavarikas and hence Annamacharya.

In the Dwipada the story of Annamacharya goes back three generations to his grandfather Narayanayya. As a boy Narayanayya was not keen in studies and it was customary in those times for the gurus to subject the students to different kinds of torturous methods to create concentration on studies. When nothing worked for the young boy, he decided that death would be better than the life filled with torture, humiliation, and shame. He heard about the venomous cobra in the snake hole at the temple of Chinthalamma the village Goddess. In an attempt to take his life away, Narayanayya put his hand in the snake hole at the temple. To his surprise, the village Goddess appeared before him and advised him not to take his life away since a boy with an element of Hari or Vishnu would be born in the third generation of Narayanayya.

Narayana Suri, the son of Narayanayya, did not have children for a long time. Narayana Suri and his wife Lakkamamba visited Tirumala Temple and while they were prostrating in front of the Holy Mast (Dhwaja Sthambha) a dazzling brilliance from the sword of Lord Venkateswara struck them like a lightening. Eventually a boy was born to them and they named him Annamayya. Annamayya became Annamacharya when the sage Ghana Vishnu at Tirumala converted him into a Vaishnavaite at the age of 8.

During his long and prolific career, Annamacharya composed and sang 32,000 Sankirtanas, 12 Satakas (sets of hundred verses), Ramayana in the form of Dwipada,SsankIrtana Lakshanam (Characteristics of sankIrtanas), Sringaara Manjari, and Venkatachala Mahatmamyam. His works were in Telugu, Sanskrit and a few other languages of India.

Annamacharya wrote the sankirtanas on palm leaves and later his son Tirumalacharya got them engraved on copper plates. But for reasons not known, most of these copper plates lay hidden in a rock built cell opposite to Hundi in the Tirumala temple unnoticed for over 400 years.
In 1922, twenty five hundred copper plates, comprising of about 14,000 sankIrtanas and a few other works, were found in a rock built cell, later named as Sankirtana Bhandagaram, opposite to the Hundi (donation box).

Ever since the discovery of this lost treasure, Tirumala Tirupati Devastanams (TTD) and other organizations in India are working hard to promote the music and literature of Annamacharya. SVASA based in Riverside, honors Annamacharya by organizing both the jayanti (birth anniversary) and the vardhanti commemorations annually and also organizes other devotional activities such as spiritual discourses, devotional music recitals, and other devotional services and thereby creates/increases spiritual awareness in the community.