KADAPA: A. Sundara Kumar Das, assumed charge as the Kadapa Superintendent of Police during this morning. Upon assuming the charge he said that he would ensure traditional and visible policing in the district. 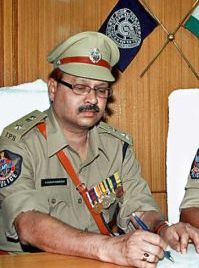 Speaking to newsmen at the District Police Office, Mr. Das stressed the need to curb incidents of burglaries and house-breaking, which have been on the rise.

He directed police officials to organise all-night beats to curb incidents of thefts and house-breaking and added that he would inspect the night beats himself.

Read :  Regional pride that works in favour of Jagan-The Hindu

He underscored the need to ensure that at least 75 per cent of the stolen property was recovered and recalled that he achieved 76 per cent recovery in Medak district.

Asserting that the police would take stern measures to deal with red sander smuggling, the SP said that the police had assumed the responsibility of checking the plunder of valuable forest wealth as Forest Department officials could not do so effectively.
Police would organise check-posts in faction-prone villages but the people of the village concerned should bear the costs, he said.

The SP wanted traffic bottlenecks to be cleared, despite shortfall in traffic policemen due to lack of recruitment after 2008, promotions, and retirements.

He suggested to police officials that cement factories and mining companies could be asked to maintain one traffic island each in Kadapa city, as being done in Hyderabad.

Mr. Sundara Kumar Das, who worked with the CID prior to this posting, had earlier served as SP of Guntur, Vijayawada and Medak.