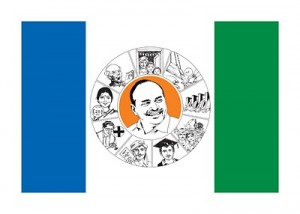 Earlier, Jagan Mohan Reddy along with his mother Vijayamma reached the YSR’s memorial in Idupulapaya and paid tributes to Reddy. Later, amidst a huge gathering of his followers who thronged the village from different parts, Jagan unveiled the flag and waved it. Party leaders said the blue in the flag represents youth, white stands for peace and green symbolises agriculture. As the election code is in force, Jagan did not make any speech.

After the brief ceremony Jagan air-dashed to Bangalore. Sources said Jagan would field candidates on behalf of the YSR Congress Party in the Kadapa by-elections. The party is trying for a common election symbol – bell. Local tahsildar Srinivasulu served notices to Jagan’s close relative YS Konda Reddy, who has organised the programme, warning that no political speeches should be made as the election code was in force.

Another notice was served to the private security personnel posted at the YSR estates. As no police security was provided to the Jagan’s programme, thousands of fans surrounded him making it difficult for him to reach the memorial. Jagan’s private security personnel had a tough time controlling the crowd. Apart from several MLAs and former ministers, Jagan’s wife Bharati and his sister Sharmila were present at the programme.

Soon after Jagan unveiled the flag, some TV channels went on an overdrive suggesting that he had violated the code of conduct and that the Election Commission had issued notices to him. However, Chief Electoral Officer Bhanwarlal told reporters that the EC had only cautioned Jagan against conducting any political meeting while unveiling the party flag as the election code of conduct is in force in the state. “Unveiling the flag does not come under violation of the model code of conduct,” Bhanwarlal clarified and said Jagan did not violate it and no notice was served to him. “He was only asked not to conduct any political meeting and we sent a reminder that it would attract charges of violation of code of conduct. The local tehsildar served the precautionary notice,” he said. “The YSR Congress Party is not connected in any way with the MLC elections as it is not participating in the elections or supporting any other candidate who is participating in the elections,” Bhanwarlal said. 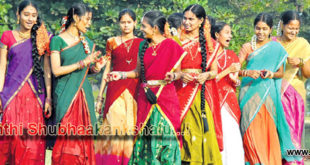