In a surprise development, the Tirumala Tirupati Devasthanams (TTD) on Friday announced its decision to hand over the famed Gandi Sri Veeranjaneya Swamy temple in Chakrayapet mandal of Kadapa district back to the Endowments Department.

The temple’s ownership changed hands between the Endowments Department and the TTD four times in the last twelve years, making a mockery of temple autonomy. The TTD took control of the temple in 2007, but handed it back to the department in 2015.

After coming into power, the State Government led by Y.S. Jagan Mohan Reddy recently directed the TTD to take over the temple, which it did in August-end, only for the move to be set aside by the High Court based on a complaint filed by Congress leader P. Naveen Kumar Reddy.

Though the court took up Mr. Naveen’s plea and passed a verdict against the takeover, the TTD officials had by then completed the acquisition process. After Mr. Naveen threatened to file a case of contempt of court, the TTD volunteered to hand over the temple back to the department.

In a communication addressed to the Commissioner of Endowments on Wednesday, the TTD urged the latter to initiate formalities for taking back the temple into its fold. 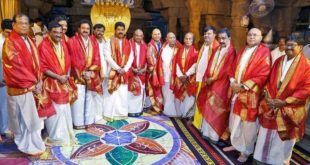 KADAPA: Thousands of devotees participated in the Rathotsavam in Sri Venkateswara Swamy temple at Devunikadapa …