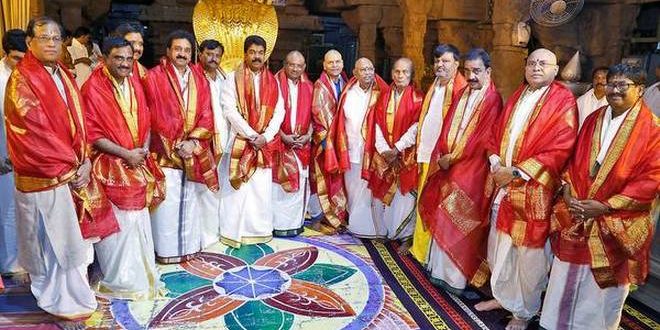 Kadapa: Putta Sudhakar Yadav who was a member of the previous trust board sworn in as chairman of the TTD Trust Board on Saturday, 28th of April in Tirumala.

Mr. Yadav’s appointment comes a year after the expiry of the term of the previous board led by Ch. Krishnamurthy, in which he had served as a member.

At a brief ceremony organised at ‘Bangaru Vakili’ inside the temple, TTD Executive Officer Anil Kumar Singhal administered the oath to Mr. Yadav.

Soon after the ceremony, the priests showered ‘Vedasirvachanams’ on Yadav and his team.

Chairperson of Infosys Foundation Sudha Narayana Murthy; Telangana TDP MLA Sandra Venkata Veeraiah; and Sapna Mungantiwar, wife of a Minister from Maharashtra, who were also appointed trustees, could not make it to the function. Interruption of the darshan lines for more than two hours to facilitate the oath-taking ceremony subjected the pilgrims to difficulties.

Later, addressing the media, Mr. Yadav thanked Chief Minister Chandrababu Naidu for giving him the opportunity and said the common pilgrim would always be his priority.

Mr. Yadav said he would strive to protect the sanctity and serenity of the temple and rigorously promote the dharmic activities.