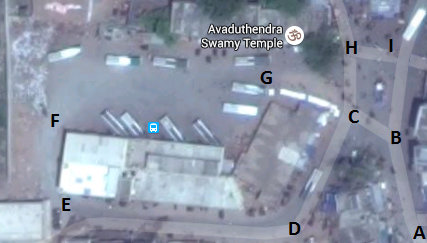 Share
The first picture shows an aerial view of RTC Bus Stand in Kadapa. The buses enter from North-West and exit from North-East. Though the routes of outgoing buses and the buses coming from the east do intersect, it is not a big problem because there is only one straight road outside. The vehicular movement is smooth. This bus stand, though not a very big one, with ample parking place and lush greenery is one of the most picturesque bus stations in AP.

Contrast this with the scene at the Old Bus Stand: The second picture shows the Old Bus Stand at the same zoom level. The empty space available within this bus stand for the buses is much wider than that in the RTC Bus Stand. But the way it is being utilized is pathetic. The entering and exiting buses have to criss-cross each other. The problem is confounded because big and small vehicles as well as pedestrians in large numbers enter this core area from at least four different roads and also numerous by-lanes. To ease congestion, several options were tried with little use. For a few days, the buses were made to follow the route A-B-C-D-E-FG-H-I. Then for a few days, A-B-C-G-F-E-D-C-H-I. For a few more days, the bus routes were reversed to follow I-H-C-D-E-F-G-C-B-A.

Read :  Reliance outlets attacked over Russian portal expose on YSR death
In the route A-B-C-D-E-FG-H-I, the buses enter the bus stand from E and observe how narrow the entrance at the bottom left corner is! The partly visible structure is an incomplete bridge hanging without any approach road (it is a different story). Imagine the situation when the approach road to the bridge is in place. No bus can enter or exit from corner E. 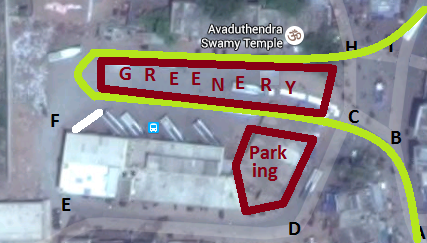 One possible solution to this problem is shown in the third picture the merits and demerits of which can be discussed in detail. The buses can enter the bus stand directly following A-B-C and leave by taking a U turn, follow H-I to reach the famous Seven Roads Circle to disperse in different directions to different destinations. Within the bus stand, the buses stop on the platforms in the NorthEast to SouthWest angle (as indicated by a white line at the last platform) instead of the NorthWest to SouthEast direction. Going by the layout in the RTC bus stand, it is enough to leave space equal to the length of two buses in front of the platforms. If more space is needed, space earmarked for greenery can be reduced to that extent.
Parking: There is a dilapidated structure at the entrance of the bus stand which till a few years back served as commercial complex. There are still a couple of shops in that building but the structure is in a very bad state. Once the building is demolished, the same place can be used for parking vehicles.