One important fact we learn from the lives of these great souls is that they all demonstrate the right and the capacity of women to live a life of utmost renunciation and of divine realization. Molla was one such evolved soul. The earliest and perhaps the greatest of the Telugu poets, she gained renown during the glorious reign of King Krishna Deva Raya of the Vijayanagara Empire. 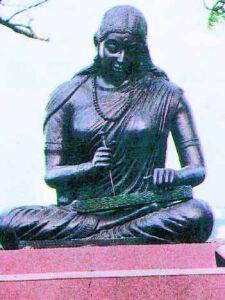 She was of humble origin, being the daughter of Kesana, a potter of Gopavaram, a village near badvel in kadapa district in Andhra Pradesh. Her parents were great devotees of Siva in his forms as Mallikarjuna and Mallikamba of Srisailam. They were initiated disciples of the Siva Math. Kesana was well-known not only in his own village but also in the surrounding hamlets, for his generosity and love. His wife was not an ordinary woman but indeed a goddess to the village folk. An all-embracing love filled her heart and raised her to a lofty plane. She was most concerned about the wants of her neighbours. In the midst of her household duties she would now and then go to attend to their needs. As a householder, Kesana was leading a happy life, his only sorrow being that he had no children. The couple therefore started praying to Sri Kanta Malleswara for a child. Pleased with their austerities the Lord bestowed on them a boon fulfilling their wish.

Thus, around the year A.D. 1440, Kesana’s wife gave birth to a female child. The baby was very beautiful and had an air of divinity about her. Immediately, respected astrologers were called to study the position of the stars at the birth of the newborn baby and to foretell her future. They found that the child has come into the world at an inauspicious moment. They predicted that the mother of the newborn would die within a few days and noted many other dangers too. They further predicted that if the baby was able to overcome all dangers and did survive, she would live long, more than eighty years and would earn great distinction, occupying a place of eminence in the galaxy of great souls of India; her name would be written in golden letters in the history of Vijayanagar. Her fame would spread like the fragrance of the jasmine. According to the star of her birth, she was hence named “Molla”, a jasmine flower.

A few days after the birth of the baby, Kesana’s wife did indeed pass away with a calm and serene look on her face. Though Kesana accepted it quietly as god’s will, he found it very difficult to bring up the baby on his own. But the village women consoled him, promising to take over the entire responsibility of looking after the baby while he attended to his work and continued his spiritual practices as before. Kesana mentally offered the child to Sri Basaveshvara Shiva and he very lovingly used to call her “Basivi”, one who is dedicated to the service of Basava.

At the age of five, Molla was sent to the village school. She took her studies very seriously. She was very quiet by nature and from a very early age she showed signs of being intensely spiritual. While still very young, she has developed the habit of visiting the Siva temple daily to offer worship and prayers. At the age of twelve, Kesana took her to their family priest in Srishailam for being initiatted. Recognizing her extraordinary spiritual disposition, the Guru told Kesana that his daughter was not destined to lead a married life; she would instead become a saint and fourteen generations of his family would be elevated thereby.

On his return from Srisailam, Kesana gave full freedom to Molla to carry on her spiritual practices. As she grew older, she continued to stay at home, living like a brahmacharini and observing all the rules and regulations laid down by her guru. One day, as usual, Molla went to the local village temple to perform her daily worship, japa and so on. There she went into deep meditation. This was followed by a vision. In that vision, Sri Rama appeared before her and ordered her to write the Ramayana immediately. She got up and told the temple priest about this. He quickly arranged to procure palm leaf for paper, feathers of birds for a pen and leaf juice for ink.

She meditated for a while and started writing thereafter without a break. She completed six cantos of the Ramayana from the Bal Kanda to the Yuddha Kanda within a short time. Then she started reading it aloud. It was an excellent composition. The priest ran to the village to inform the people of this amazing event and he invited them to come and hear Molla’s Ramayana.

The news soon spread to the neighbouring villages. People started visiting the Siva temple daily to hear the Ramayana she had composed. Slowly this news reached the capital of the empire and then up to the royal court. Being himself a great scholar, King Krishna Deva Raya wished to hear Molla’s Ramayana. Accordingly, orders were sent to bring her to the royal court. Molla was brought with majestic dignity from her village of Gopavaram to the royal court. When she recited the Ramayana in her melodious voice, the king and his courtiers listened spellbound.

In the royal court, the eight high class poets wanted to test Molla’s poetic talent in front of the emperor. They asked her to demonstrate her talent by composing two stanzas, in a particular metre on the theme of ‘How the lordly elephant was saved from the grip of the crocodile who was stronger than himself’. This theme is found in the eighth canto of the second chapter of the Bhagavat Purana. And she was given only one minute to think. Molla looked up at the heavens, then closed her eyes, mentally prayed to Sri Rama and in her melodious voice sang the two poems within the prescribed time. All the poets were struck dumb. She had been able to silence all of them.

Then the poets of the royal court not only gave her the title of “Kavi Ratna” but also recommended to the king that he show great honour to this saint and poetess by performing the “Suvarna Abhisheka”, presentation of gold, which the king accepted to do. Again at the King’s court, one of the court poets named Tenali Rama asked her some questions. Here are the questions and Molla’s replies.

Question : Who is your Guru ?

Answer : Sri Kantha Mallikarjuna, the Guru of all gurus.

Question : Why did you choose to compose your Ramayana in colloquial language ?

Answer : This Ramayana is only for the masses. If I had used Sanskrit, it would be like singing in front of a deaf and dumb person. It would be like a donkey carrying sandalwood who knows only its quantity, not its quality. My child, if the sugarcane is bent and low, will that lessen its sweetness ?

Question : Why have you not dedicated your book to the emperor ?

Answer : Is it my book ? It belongs to Sri Rama. I am only an instrument.

Question : Born and brought up in a remote village and that too in a potter’s family, how were you able to acquire such great spiritual insight ?

Answer : My father being a potter, I observed him making models of all animate and inanimate forms. All these he prepared with one substance only : clay. Every day in our village we see oil in seeds, butter in curds, water in underground springs, fire in wood. Even so, the Atman is perceived in the Self.

In the Sevetasvatara Upanishad (1.15, 16) the four similes with distinct shades of suggestiveness are found. The first suggests that the Atman is present everywhere, just as oil pervades the whole of the sesame seed. The second implies that the impersonal Atman though all- pervading, assumes the form of the personal God under the influence of bhakta, like butter contained in milk. The third conveys the idea that the bliss of Atman relieves us of all suffering, even as a man digging for water is relieved of his trouble when the water level is reached. The fourth conveys that by rubbing one stick against another a man gets fire. Primarily, they all alike convey by implication the idea of the immanence of God.

Returning to her native village, Molla entrusted her Ramayana, which was already dedicated to Sri Kantha Malleswara, to the temple authorities. As her life’s mission was over, she took leave of the deity as also of the vilage folk and left for Srisailam to spend the rest of her life performing great austerities. During her last days she also spent a great deal of time preaching to those seekers of God who came to her for inspiration and enlightenment. Molla went into Mahasamadhi about A.D. 1530 at the ripe age of ninety years. Though Molla’s physical body is gone, her life will continue to be a living example for ages to come. The poems Molla composed throughout her life are sung wherever Telugu is spoken, throughout the country. Their simplicity and intense spiritual fervour have made them popular in the past five hundred years.