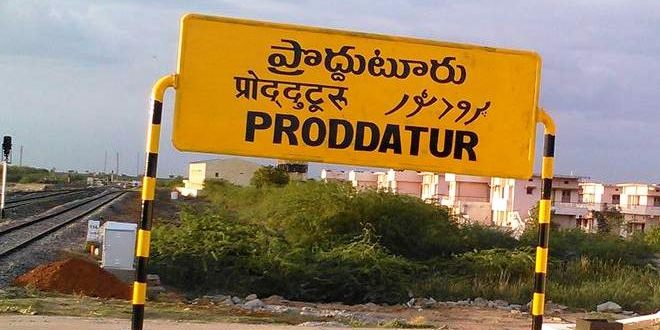 Proddatur or Proddutur (Telugu: ప్రొద్దుటూరు) is situated on the north bank of the Penner eight miles from Yerraguntla railway station and is 51KM away from the district head quarters – Kadapa.

Proddatur is certainly the wealthiest town in the Kadapa district and possibly in the Ceded (Rayalaseema) Districts. In its pressing and ginning factories large quantities of raw cotton are prepared for the market by power-driven machinery. The trade of the town, the bulk of which is concerned swath cotton, indigo and food-grains, is chiefly in the hands of the rich Komati (AryaVysya) community which is here very largely represented. Evidence of their prosperity is seen in their substantial jewellers shops with which the place abounds. The town has a very busy bazaar and a local fund market where country produce is brought in and sold every day.

Of the four large temples in the town the only one possessing any special interest is that of the goddess Kanyaka Parameswari in the main bazaar, which was erected by the Komati (AryaVysya) community at a cost of a lakh of rupees. The front is most elaborately carved and is an excellent specimen of modern work. The carving is very good of its kind and some of it is very spirited. The god Subramanya riding a yah in puttees and boots adds a touch of modernity. These carvings are the work of the famous sculptors of Gumpramanudinne.’ Its famous for festival celebrations during Vijaya Dasami (Dasara) festival and considered second only to Mysore.The Komatis have made it a very important centre of trade and, though Kadapa may attract more of the raw products of this district on account of its railway station, Proddatur is the market for much of the Kurnool and Anantapur districts, while the wealth of the leading traders renders possible transactions of a magnitude unequalled in this part of the Deccan. Its importance and increasing wealth have led to proposals in recent years to convert it into a municipal corporation. Some years ago a scheme was formulated to connect Proddatur with the railway system by means of a branch line from Yerraguntla to Nadyal.

During British regime the Government offices lie to the north of the town, and the cluster of houses near them, which are inhabited chiefly by officials and vakils is known as Holmespet after a former Sub-Collector of that name. This again is divided from the main bazaar by the reservoir from which the town gets its water-supply. This is fed by a channel from the Penner. On two sides of it the Union authorities have rows of lifts working by pulleys to ensure the water-supply against contamination; but these are not generally used, as the people prefer to risk disease and fill their vessels by descending into the water by the steps on the other sides. Adjoining the reservoir is a small park opened in 1903 in honour of the coronation of the King-Emperor Edward VII. The town was constituted a union in 1886.

Temples in the town:

How to Reach Proddatur:

Proddatur is connected with the major and minor cities of Andhra Pradesh by both state transport corporation and private buses.

Near by airport is Kadapa,  situated at a distance of 50 km from Proddatur. Besides this, airdromes at Hyderabad, Chennai, Bangalore and Tirupati are quite near to the town.