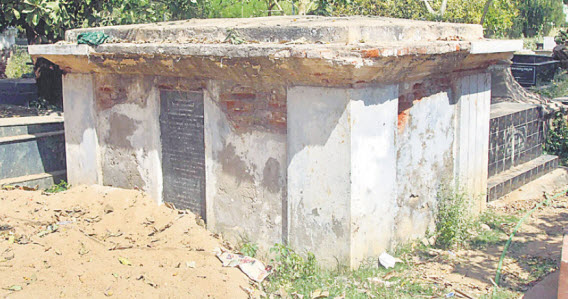 One can see the above sentence on one of the ancient tombs that is there in Kadapa town. This tomb is said to be of  british couple Mr. Mac Donald & Mrs. Agnus.

Mr. Mac Donald was the sub collector of Kadapa district during 1832 (Britsher’s Rule). He was murdered during a riot that happened in between two religions in Kadapa. Agnus, who married to Donald and is very affectionate towards him died after hearing the murder news of him.

Early in the morning of June 15, it was said that a small pig had been killed and thrown bleeding into the Jumma Masjid. It turned out afterwards that this pig was merely a bandicoot and had been purposely placed there by a Musalman aided by two Hindus. But the populace speedily became excited and gave no thought to the possible origin of the incident or the perpetrator of the supposed offence.

Meeting in the market place and the principal bazaars of the town the Pathans gathered in large numbers and fanned the passions of one and all. By 10 o’clock the crowd had assumed alarming proportions and exhibited so uncompromising an attitude that Mr. Macdonald sent a message to the Collector who resided at some distance from the town, reporting that he would endeavour to quiet the mob, but, if necessary, would send for the military from the cantonment.

Order for a detachment…

Mr. Macdonald then got into his palanquin and went to the cutcherry where he found the native subordinates assembled and in a great state of alarm. An order was at once sent for a detachment, but Macdonald was not destined to see its arrival. A letter was brought to him from a missionary, Mr. Howel, who lived in the middle of the town and who said that he feared an instant attack upon his house. Macdonald, in spite of the protestation of the cutcherry officials, at once determined to do his best to help the missionary. He went into the bazaar accompanied only by a few peons.

A naick and some of the treasuryguard sepoys followed him, but it is probable that their presence only served still more to excite the crowd. Macdonald had scarcely reached the bazaar before he was attacked and cut down. His revenue peons ran away, but the guard tried to defend him and shared his fate.

The last blow is said to have been given by a Pathan butcher ; but after this had been dealt, the mob was taken aback. It dissolved as rapidly as it had gathered, and in a few minutes the streets were deserted.

Five of the ring-leaders of this riot were publicly hanged near the present town police station.

Macdonald was only twenty four years of age at the time of his death, the tragedy of which is enhanced by the fact that his young wife only survived him twenty-one days, dying, it is said, of a broken heart.

The people and officials then constructed a tomb for both of them.