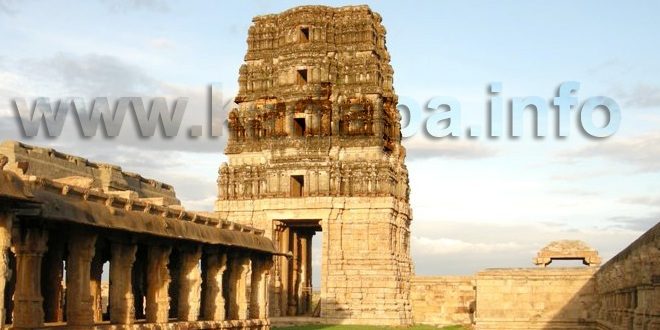 Gandikota is a small village (Lat. 140 47? N. and Long. 780 16?S.) on the Right Bank of the river Pennar, in Jammalamadugu taluk of Kadapa district, Andhra Pradesh. Here lies the famous fort of Gandikota, which acquired its name obviously due to the gorge, formed between the Erramalai range of hills, also known as Gandikota hills and the river Pennar that flows at its foot, reducing its width to a mere 300 ft.

Situated amidst beautiful landscape and wild forests, it is endowed with great potentialities of natural strength. Surrounded by a deep valley and impassable hills, with massive boulders of red granite and the river Pennar that flows about 300 ft. Guarded by a huge entrance gate that’s 20 feet high and 101 bastions each over 40 feet high, it still remains a very imposing structure. Believed to have been built during the later half of the 13th century A.D., Gandikota impressed the French traveler Tavernier, so much that he opined that it resembles Hampi Vijayanagara in its massive monuments.Below on the west and northern sides, it affords strong natural defiance to the occupants of the Fort. Roughly it occupies an area of about 5 miles in circumference and is circular on plan.

Read :  Regional pride that works in favour of Jagan-The Hindu

The early history of the fort, according to a legend contained in the Kaifiyat of Gandikota, begins in 12th AD when, a certain chief Kakaraja, a subordinate of Ahavamalla Someswara I, the Western Chalukyan king of Kalyana, founded it in 1123 A.D. It also played a significant role during the Kakatiya, Vijayanagara and Qutub Shahi periods.

Within the fort, there are many interesting places of worth seing. The Ranganatha and Madhavaswamy temples, built during the 15th – 16th centuries, are adorned with sculptures and are in an architectural style reminiscent of the Vijayanagara period. The Juma Masjid, covering a huge area stands next to a large granary, used to stockpile food during the time of a siege. An impressive ‘Pigeon Tower’ and a palace with plastered decorations are also interesting structures.

From the top of the fort, you can have a breathtakingly panoramic view of the surrounding forests and valleys. Nearby, is the picturesque Mylavaram Dam which is a popular picnic spot because of the sparkling waters, lush trees and cool breeze, which make you want to stretch out and relax.

AndhraPradesh Tourism Development Coorporartion recently constructed cottages/restaurant/rooms at Gandikota, to accomodate tourists. There are 3 AC double rooms & 6 Non AC rooms available. There is a seminar hall, choultry (which can accomodate 20 people) aviable with in the cottage.

HOW TO REACH GANDIKOTA:

Gandikota is located 15 kms from Jammalamadugu and 77 Kms from Kadapa by Road.

Gandikota is located 77 Kms from Kadapa and 219 kms from Tirupati.